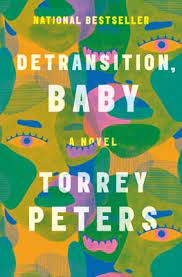 Detransition, Baby by Torrey Peters is an insiders view of the world of trans women and moms. It deepened my perspective by providing multi-dimensional characters showing internal divisions in what may look like a unified group from the outside as well as the kind of insight into the details of the lived experience that are otherwise difficult to know. As fiction, it did this while getting me to care about the characters and reluctantly accept a rather unusual arrangement.
A great quote: "Reese is a veteran of the horrific social gore that results when individuals fight persoanl battles with unnecessarily political weaponry on a queer battlefield mine with hypersensitive explosives." Leaving out the queerness of the battlefield, this is something I've struggled with: how to reconcile societal-wide gender issues within a loving relationship.

Commentary on Queerness, Race and Motherhood

I liked how the author examined queerness and race as applied to motherhood. At one point the characters admit they were having a sort of competition of who is most victimized. And it also deals with the "gentrification of queerness." As one character says, "I think everyone wants something queer now. It's like a fad."  I know from the interview that motivated me to read it that the author faced criticism for dealing with the issue of detransitioning (anyone unfamiliar with the controversy could start their education here). In a time when many people fear being criticized for expressing unpopular opinions, this is a brave step forward that more people should emulate (along with accepting responsibility for causing hurt if they do). I believe it is a strong evidence for the #ownvoices movement: because the inside perspective from a persecuted group is the voice that should be allowed to explore controversial questions.
A small love was that a character echoes one of my favorite personal observations: how there is a season of weddings in our twenties, then the babies come for about a decade, and then come the divorces. (Not sure if she mentions the obvious next step, but I can't find it--I listened to it as an audiobook and even with a hard copy, I don't have the visual memory necessary to skim for a few sentences).

As for structure: it is similar to the novel I'm writing right now, with a current and a past timeline. The current is told in present tense and the past in past tense, and although there are two POV characters, they both tell current and past stories (as opposed to mine which is the story of one character in the past merged with another in the present, both told in past tense). One of the fascinating things to me was how some of the story beats were hit in the old timeline instead of the new.  Specifically the dark moment revealing how the relationship ended in the past timeline.
The multiple POVs were used very effectively to show two different people's perspective on the same thing (most clear: the ending of that relationship). I was kind of mad when the 2nd POV started because the 1st had denigrated that character enough that I didn't find him sympathetic already. But I ended up sympathising more with him after hearing his side of the story!
Looking back at the beginning once I knew the story gave me great admiration for the author. The opening scene is intensely tied to the climax, and to the topic of becoming pregnant. A small hate was that the plot turned on the blame placed on the 'other woman' instead of on the cheating husband. Haven't we learned yet that the person who breaks the vow is responsible for their behavior, not the person who tempts them?

I want to talk about the ending so here's your chance: exit now if you haven't read the book.  I think it will ruin the story for you if you know how it ends. A crucial writing technique I learned from Rachel Weaver is to raise small questions that drive the reader forward to find the answer.  There is a big question that the reader has to get to the end to find out.
Okay-- last chance. I'm not kidding. Check out the book, or buy it from bookshop.org giving a local book store your love, and set yourself a calendar reminder to come back after you've read it.
<<<<<>>>>>
When I got to the end, my first reaction was "No, the author can't do that!" Then I realized I'd been so curious to see how it ended because I didn't see how it could possibly end either way. So yeah, it pretty much had be undecided. She definitely did the short story thing and gave a clear direction to assume, and then a strong hint that it might not go that way. I guess I know which way I wanted it to go, and I should just imagine that. But still!! It's not a short story. I can only imagine the angst caused in critique groups, by the agent and the editor and I can guess it was the author who had to stand up and say "This is the way it will end." So kudos to her for that!
Posted by Dani at 1:57 PM