The Snowflake Method by Randy Ingermanson

I just found Randy Ingermanson and laughed several times while reading his article about Dwight Swain's advice. Perhaps I'm just sympathetic because I use and have written about the large-scale scene struture as well. But Randy has more than just an appreciation for Dwight Swain; as a theoretical physicist, he has a method of using fractal theory to design a novel.

I will try this method as I'm developing an idea for my next novel. I had hoped to bust it out for NaNoWriMo but discussions with my critique group when they finished my current novel in August inspired me to make a major change... which has of course led to more changes and I'm basically re-writing the thing again. Plus NaNoWriMo was clearly made for people who don't have kids out of school for one-fourth of the month nor a feast to prepare! My current hope is to be done with the new draft "soon" (end of the year? I'm about two-thirds through...) and get it to beta readers while I do a sort of MidJanuFebNoWriMo all of my own.
Posted by Dani at 9:31 AM No comments:

Storytelling Lessons from Orange Is The New Black

So far my husband and I have found the first season to be hilarious, moving and thought-provoking. It inspired me to pick up the book and I am noting how the TV script diverges from the memoir, almost always in ways that make the story more interesting. Here are a few strengths present in Episode 2, when Piper is being starved out by the cook, Red, and has to figure out how to get food.

1) Introducing backstory to show how the character triumphs

We see flashbacks into Piper's pre-prison life of
- doing a lemon cleanse: she can think of starvation in terms of something she's voluntarily done before while introducing comical elements and deepening the viewer's understanding of Piper's relationship with her husband
- making soaps and lotions: shows how she learned to make those things from her friend (while explaining what her career is and showing her being the one who motivated the business)

2) Try/Fail cycle
- First, Piper uses what works in her upper-middle-class, white world: a sincere apology. Fail.
- Second, she takes the advice of her cellmate and tries to get Red to beat her up. Fail.
- Finally, she listens to what Red tells her (do something nice for her) with what she's observed (Red has a bad back) and her experiences (making bath products) to make her a jalapeno lotion. Success!

Red is the antagonist in this episode, but the flashbacks show her trying to get in with the snobby Russian women because her husband wants her to. The women are mean to Red and this makes us sympathetic toward her. We see her frustration come out with terrible consequences: she pushes one of the women, popping her silicone breast. The husband comes home with news that they owe $60,000, and we are sympathetic to him too, when he points out the men are meaner than their wives.

Red's flashback concludes when we see her husband letting the men put bulky, black-plastic-wrapped objects into their restaurant's freezer.  Red and her husband have worried expressions, so we assume it is something illegal. Since we know that Red ends up in prison, we can guess that they were caught and she and her husband were blamed. None of this is shown, which makes the reader/viewer an active participant. My husband and I even had a discussion after watching about what was in the bags; from our cultural knowledge of the mob and what they do, we assumed body parts. But the important thing is we were thinking and talking about it, which made us active participants.

I'm a big fan of Dan Koboldt's blog posts featuring experts offering advice to help writers get their fields right. Now these posts have been compiled in book form. Read a sample or Order from your favorite bookseller

Detective stories aren't usually on my bookshelf, but when I found out my coworker had written a novel, I wanted to read it.

From the first page, I was pleasantly surprised that the writing was excellent. I spend a lot of time reading for critique groups and beta-trades and this was well plotted and polished.  The story itself kept me engaged and thinking through a quick, enjoyable read.  The detective was an interesting character but I felt closer to the psychologist by the end. But my favorite part was the mystery--there was a perfect mix of clues that kept me guessing until the end.

His second book just came out so let me know what you think!

How many of you are actually UNIX users who write fiction in Microsoft Word for the convenience of sharing comments with others? Wait, it's just me? Regardless of the limited audience, I need to save this cool trick for my own reference.

The real thanks  goes to the last answer of this question on stack overflow: How do I grep in microsoft word files? . I can't upvote the comment, but the theory and specifics are invaluable.


docx files are just zipped xml files.
So all you have to do is unzip them,
use sed to strip off the xml tags
and you have a grep-able text file.

(Grep is an invaluable unix command, and one of the main reasons I use a mac so I can open a terminal and use these tools I know.  Grep will return any instances of a string from a text file).

I wrapped the user's answer (in italics below) in order to convert all my docx files. I'm not going to explain all the unix commands; feel free to comment if you want to know more.

Now I should be able to search for my text string (orach, in this case) through each file.
cd text_files
grep orach *

However, the format of the replacement (sed) command above basically makes the entire document into one long line, and since grep returns the entire line that the match was found in, this is too much output.  I spent the rest of my morning writing time trying to get a newline at each replacement with sed, but it is leading me down a rabbit hole.  It all has to do with newline and escaping the newline and such and there are considerations based off of different flavors of unix/linux and shells. (For the record, OSX on a mac is BSD unix and my shell is tcsh).  I can get the \n into the file but it doesn't show up as an actual newline. 's#<[^>]\{1,\}>#\\\n#g'

Thanks to local author Amy Rivers for featuring me this summer in her #WhatsYourStory theme. It got me thinking about my path to becoming a writer.

When I first went to the Rocky Mountain Fiction Writers Gold Conference in 2014, I dreamed of someday getting recognized as a Gold Contest Finalist. In 2015, the contest filled up before I got my entry in. In 2016 and 2017, I managed to enter and got very useful feedback from my judges. Finally, this year, I got the email I've been yearning for. 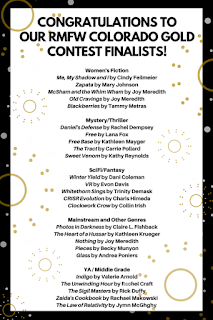 I'm so excited to get to wear a Finalist ribbon on my conference badge this year, and walk up to the stage with the other finalists. They will announce first, second and third place winners from the list but it is enough for me to be there. It validates all the hours of writing and money on classes that I've put in over the past five years.

Then my critique group read the current ending, and a suggestion from Dinosaur Four author Geoff Jones set my brain on a path of changes that could make it a lot better...but different. Now I have to decide if it is worth putting in the work to do this, and not having a finished book to pitch at the conference. Frustrating, but even more I'm excited to have so many issues solved at once. Updates forthcoming!
Posted by Dani at 9:56 AM No comments: