Wasn't Star Wars All About A Hero's Journey? 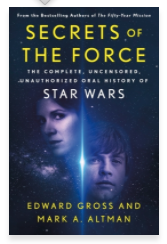 Something I've heard a lot: That the original Star Wars was successful because George Lucas was a fan of Joseph Campbell and the story follows the  The Hero's Journey monomyth.

Spencer Kornhaber's review of Secrets of the Force by Edward Gross and Mark A. Altman illustrates an interesting new perspective on how the plot points are actually weakly hit,  some were only added during filming, and the "hero" character is not as well established as has been argued.

So is it actually world-building, not plot, that makes the magic?